An elegant and successful evening at the venerable Union Club in Manhattan raised funds to benefit the Mount Vernon Hotel Museum & Garden (MVHM&G), which is wholly owned and operated by The Colonial Dames of America. One of few 18th century buildings remaining in Manhattan, the museum attracts approximately 20,000 visitors a year to its exhibits of American life in the early 19th century, when it was a popular country day hotel. The MVHM&G is accredited by the American Alliance of Museums and is listed on the National Register of Historic Places. 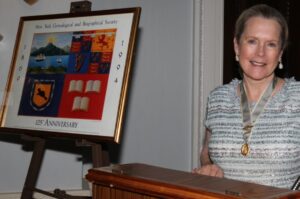 Ticket holders to the benefit were invited to attend a workshop at NYG&B on October 17th at 10:30 am. Themed “Fundamentals of Genealogical Research,” speakers included Josh Taylor and Susan R. Miller, Director of Programs and Outreach, NYG&B, who were joined by Jennifer Davis, Director of Development and Membership. The workshop shared various strategies to trace lineage, what kinds of records can be used to find information, as well as tips on how to find new leads when researchers have hit a brick wall. A memorable hint offered during the workshop: since direct evidence is actually uncommon, indirect evidence (process of elimination of other records) can be useful when applied correctly; knowledge of local history can also help to confirm discrepancies. Approximately two dozen ticket holders and their guests attended, including Claims Committee Chairman and CDA First Vice President Beverley Sherrid, who found the information “both interesting and useful.” 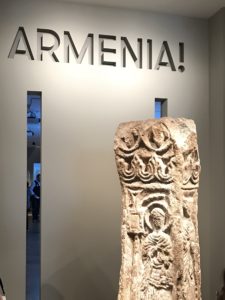 On October 16, Past CDA President General Helen Evans, curator of Early Christian and Byzantine Art at the Metropolitan Museum, gave a private tour of Armenia!, the first major exhibition to explore the remarkable artistic and cultural achievements of the Armenian people in a global context over fourteen centuries. Afterward the tour, guests enjoyed tea at the King’s Carriage House, where Helen shared some of her international experiences during a career that has taken her around the world. These events were reserved for Guardian ticket holders and above.

Attendees at Benefactor level and above joined NYG&B President Taylor the evening of October 16 for dinner at the New York Yacht Club, which was designed by Warren & Wetmore to resemble a Spanish Galleon. The club was built under the auspices of J.P Morgan in 1901 and designated a National Historic Landmark in 1987.

Click here to see a gallery of photos of the benefit evening. Photos by Cutty McGill.