In the 18thc plain gold wedding bands, called ”posy” (poesie -poetry-verse) rings, which were inscribed within, were still the norm for a brides wedding ring. Diamonds, however, began to come into favor. The custom of “keeper” rings on either side of the wedding band for accent & protection became popular in the Georgian period ( 18thc). Today, we would call them “guard” rings ! These rings were usually rose cut diamonds set in silver or gold like the ring below from the 18thc. Since the DeBeers ad campaign years ago, these keeper/guard rings are sometimes today called “Eternity” rings. The ring shown looks amazingly modern! 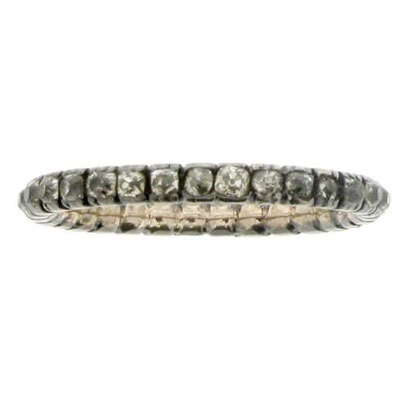