LT Governor Alexander Spotswood of Virginia is a qualifying ancestor for The CDA. He was joined on an westward expedition by numerous Prominent VA “grandees” with names such as Mason, Washington, Beverley, Fontaine, Taylor and Brooke. These gentlemen took an historic trek to the Blue Ridge Mountains. They began in Tidewater, and gathered more participants as they ventured west. The horses were shod at Germanna as they were approaching rocky terrain. ( Because of the soft sandy soil, horses were not shod in Tidewater at that time.) Once they reached the mountains the explorers camped and had a remarkable, elegant dinner by the Shenandoah River. Many toasts were made to the English royal family. This was the beginning of the Westward Movement. Below-Alexander Spotswood; the Blue Ridge Mountains in Virginia. 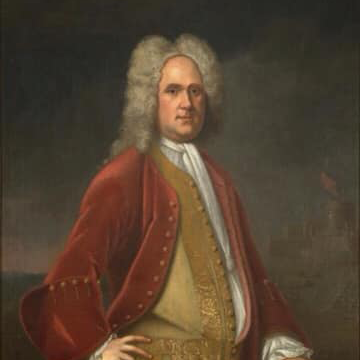