William Cole (1638/9-1694) was a second generation Virginian, a lawyer and statesman of the Virginia Colony. He married three prominent women and had had 4000 acres of land in Warwick CO. His estate was named “Bolthorpe” where his Armorial ledger stone is still on the site. Cole was on the Kings Council, was Secretary of the Colony, customs collector and confidante of Governor Berkeley. During Bacons Rebellion he was the intermediary and negotiator with rebel Nathaniel Bacon. Cole was also involved in the suppression of piracy. In 1691, Cole was one of 4 councillors that accepted the Charter to form a college in the VA colony. The College of William and Mary. He was a founding member of the first Board of Visitors of the college. The Charter is shown to the right. 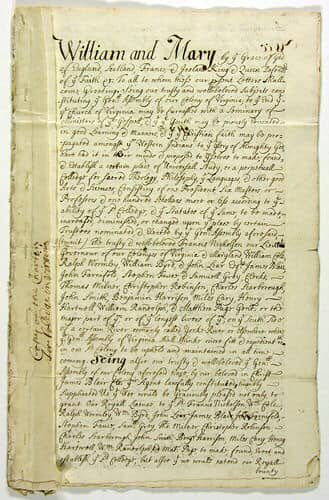