Captain Carr and his wife Elizabeth Riddick Carr were married in 1768 and lived at “Dunlora”, a classical Jeffersonian-style brick house designed by a Virginia born architect. It is in Albemarle CO, VA. CAPT Carr was the son of Thomas Jefferson’s sister, thus his nephew. The couple also owned “Bear Castle” in Louisa CO. Carr was a Captain in the Marines at the time of his death. He had service in the VA Colonial Militia and in the Revolutionary War. The portraits are courtesy of MESDA. Artist of both paintings, done in 1774, is JOHN DURAND active 1762-1788 in New York and Virginia. 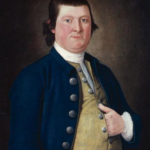 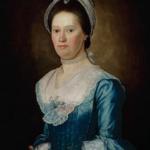