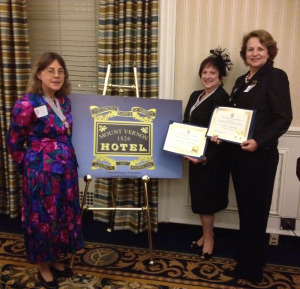 Initiated by Past President General Helen Evans, the CDA Award for Excellence is given to one or more chapters on an annual basis. The Board of Managers of The Colonial Dames of America is proud of the many projects supported by the efforts of the Chapters throughout the country and abroad.

For submission instructions, each interested chapter should download the “CDA Award for Excellence” document located in the password-protected Member Library, under the Award Forms section.

The 2022 Award for Excellence was awarded to Chapter VIII – Houston, Texas for their project in conjunction with the chapter’s “Lessons in Liberty” initiative with the Morris Family Law and Liberty Center in Houston. The awarded “Colonial Dames of Distinction” project will research, identify, fund, and frame two significant paintings/prints of notable women in colonial history to be displayed and utilized to educate 34,000 students annually.

The 2021 Award for Excellence was presented to Chapter XIV – Chicago, Illinois. Awarded funds will go toward plans to expand and refurbish the lobby and reception area of the National Museum of the American Sailor at the Great Lakes Navy base. When the project is completed, the space will accommodate larger tour groups. There will also be a new desk and storage area, and flooring, wiring, and other materials will be replaced. The museum building is of historic value itself, being the only surviving World War II-era example of architect Gordon Bunshaft’s work and a classic example of Mid-Century Modern (MCM) architecture. Originally named the “Hostess House,” Building 42 opened in 1942 as a place for sailors and their loved ones to meet and say their “hellos” and “goodbyes.”

The 2020 Award for Excellence was awarded to Chapter XXIV – Atlanta to fund renovation work at the 1908 Women’s Comfort Station at Historic Oakland Cemetery. The award amount provided for a preservationist to assess, rehabilitate, and replace priceless, custom floor tiles. The cemetery was established in 1850 on forty-eight acres of lush natural greenery, including mature magnolia, dogwood, and oak trees – hence the name “Oakland.” It is estimated that over 70,000 people are interred, including author Margaret Mitchell, golfer Bobby Jones, and Confederate and Union soldiers. The Women’s Comfort Station holds irreplaceable historic value, containing locally crafted materials for which patents no longer exist. It also denotes Oakland’s past popularity and the need for a facility to serve a community who spent leisure time in the cemetery.

The 2019 CDA Award for Excellence was awarded to Chapter XXXVIII—Santa Barbara to support a restoration project in collaboration with the Santa Barbara Trust for Historic Preservation. Awarded funds will cover the cost of colored architectural renderings for seismic retrofit and restoration of the Cota-Knox House (1871) to its original appearance. The Cota-Knox House is an important and unique building in Santa Barbara and these vivid color drawings will kick off and encourage local and regional donors to support an ensuing larger capital campaign.

The 2018 CDA Award for Excellence was awarded to Chapter XXXIX—Birmingham, Alabama to create a new addition the Junior Interpreter Program at the American Village Citizenship Trust in Montevallo, Alabama. Each year more than 45,000 students visit to take part in educational programs about America’s foundation. Chapter XXXIX’s project will purchase costumes for Junior Interpreters to portray Alexander and Eliza Hamilton’s children in a historical vignette.

The 2017 CDA Award for Excellence was awarded to Chapter XV-Jackson, Mississippi for the funding of the Columbia Courthouse’s records management program, and the project of making Marion County’s early records available to the public. The chapter used this award to support the expense of funding approximately 70 hours of scanning, and enabling the possibility for matching funds.

The 2016 CDA Award for Excellence was given to Chapter IX-Kentucky for the Doctor Ephraim McDowell Historic Home, Apothecary Shop and Herbal Gardens, to include the painting of the surgery in the McDowell House, a room that represents a turning point in American medical history. This treasured National Historic Landmark was built in the 1700’s in Danville, the first capital of Kentucky.

President General Sharon Vaino presented the 2015 CDA Award for Excellence to Chapter XXIV-Atlanta, which won for its proposal to hire a professional to evaluate a priceless collection of small, hand-whittled toys called the “Moses Robinson Collection of Folk Art” at the Sandy Springs Heritage Museum. The resulting information will be used for conservation, preservation and restoration of the collection. Accepting the award was chapter president Helen Rogge. 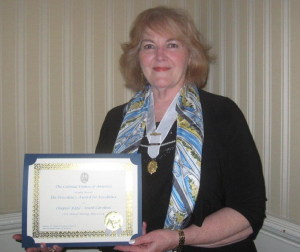 In 2014, The CDA Chapter XXXI-South Carolina received the CDA Award for Excellence for the Old Horry County Courthouse Handrails and Steps Restoration Project. A treasured landmark, listed on the National Trust for Historic Preservation Registry, the Old Horry County Courthouse built in 1825 is still in use today and serves as the City Hall for the town of Conway. Chapter XXXI will aid in restoring the handrails and steps for this historic building.

Chapter X-Rome, Italy: E-Book and print on demand focusing on the 100 most notable Americans and continuing research to document 840 Americans buried between 1803-2010 in the Cimitero Acattolico, the Non-Catholic Cemetery, established 1712, in Rome, Italy.

In 2012, the President’s Award for Excellence was given to Chapter XXIV-Atlanta, Georgia for a Grant for Continuing Education, The Georgia Trust for Historic Preservation – Staff Development

Chapter III-Washington, D.C.: The preservation and Historical Designation of the Abner Cloud Mill

Chapter XXXI-South Carolina: Restoration of the brick steps at Hopsewee Plantation House (circa 1740) birthplace of Thomas Lynch, youngest signer of the Declaration of Independence, at age 26.

Chapter X-Rome, Italy: Published a booklet about the Americans buried in the famous Protestant Cemetery in Rome.

Chapter XI-London, England: Replacing an ancient, worn sign with a new legible one in the American Garden in Bath.

Chapter IV-Paris, France: Assisting L’Association Hermione La Fayette, in constructing a replica of the frigate upon which the Marquis de La Fayette sailed into Boston Harbor in 1780 to aid General George Washington during the Revolutionary war.

Chapter XXIII-Virginia: Support of the Jamestowne Rediscovery project to support a graduate student at the archeology dig on Jamestowne Island, in preparation for the 400th celebration of the settlement of Jamestowne, Virginia.

Chapter XXX-Venice, Florida: Support of the Venice Area Historical Society’s efforts to educate the public about the entities who used the recently restored Venice Train Depot and laying the groundwork for a Circus Educational Program which will tell the story of the Ringling Bros. and Barnum and Bailey Circus as it arrived and departed each year from its winter home.