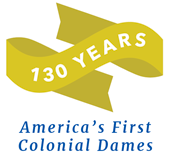 Alice Cooney Frelinghuysen, curator of American Decorative Arts at The Metropolitan Museum of Art, was the guest speaker October 28, 2014 at the CDA’s annual Fall Fundraiser. Held at the Abigail Adams Smith Auditorium in New York City, the proceeds of the evening benefitted the Mt. Vernon Hotel Museum & Garden, owned and operated by the Dames.

As a remembrance of the evening, Ms. Frelinghuysen was presented with a hand-painted Renaissance-design majolica bowl from Deruta, Italy, which incorporated the museum logo. City Councilman Benjamin J. Kallos honored the society with a proclamation from the City of New York, which was accepted by President General Sharon W. Vaino.  Chaired by First Vice President Beverley Sherrid and Board of Managers member Mary Reiner Barnes, the evening drew Dames and friends from New York and around the country. Honorary Chairman Eugenie A. Havemeyer (Parent Chapter) was given a hand-painted majolica bowl from Deruta decorated with the CDA insignia and a 17th century hunting motif.

CK Swett of Leigh Keno Auctioneers conducted the lively auction that included trips to Italy, to Chicago and to Newport, as well as other special items. Proceeds went to support the Museum and its programs.