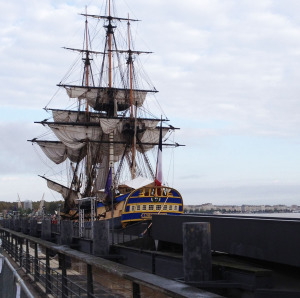 L’Hermione is a full-sized replica of General Lafayette’s ship, also known as the Frigate of Liberty.  Chapter IV – Paris was a major sponsor of its Atlantic journey in 2015. On April 18th, L’Hermione departed from Aix, heading to Las Palmas, Gran Canaria, where she made a call until May 6th, when L’Hermione set sail for the USA. The 84 crew members and the ship sailed accross the Atlantic to the United States, arriving in Yorktown in June. The frigate then started her journey along the American coast. [ Learn more about the L’Hermoine’s 2015 voyage ]

The Letters to Washington