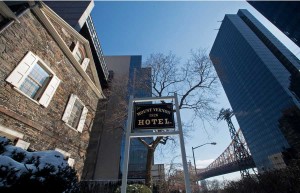 “The Colonial Dames of America own and operate the museum, having purchased it in 1924 to use as their headquarters. Originating as a carriage house in 1799, the building later served as a country hotel, the Mount Vernon, and then had turns as a private home and antiques showroom. In 1939, the patriotic Dames — descendants of gentlemen who held public office or a military commission before the American Revolution — opened it to the public as the Abigail Adams Smith House.”     Read Full Article