1890 SOCIETY AND PAST PRESIDENTS GENERAL RECEPTION

The weekend began with a cocktail reception the evening of Friday, April 26th hosted at a private club by President General Brantley Knowles. Guests included Past Presidents General and members of the 1890 Society, Dames who donated $1890 or more to CDA during the previous fiscal year.

On Saturday afternoon, April 27th, the Executive Council Meeting convened in the Abigail Adams Smith Ballroom, where presidents and delegates from chapters around the US and Europe met to review the previous year’s activities, current projects, and plans for the future.  The meeting, which is open to all Dames and their guests, was also attended by the Board of Managers and Society Committee Chairmen.

On Saturday evening, CDA’s Awards Dinner was held at the Yale Club. The awards presented during the dinner were the Annual Book Awards, honoring authors of notable books, and the Award for Excellence, supporting a selected chapter’s exemplary project in furthering historic preservation or education. 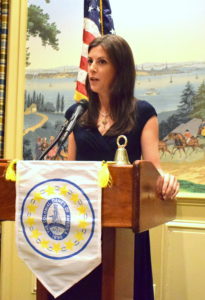 The Annual Book Award was presented to Victoria Johnson for AMERICAN EDEN: David Hosack, Botany, and Medicine in the Garden of the Early Republic.  As keynote speaker, Professor Johnson delivered a spellbinding speech about Dr. Hosack and his influence on the early republic as the founder of the nation’s first public botanical garden and as a founder and ardent advocate of many critical early civic institutions.

The Book Award Citation was presented to A.J. Baime for THE ACCIDENTAL PRESIDENT: Harry S. Truman and the Four Months that Changed the World.  THIRTY MINUTES OVER OREGON, A Japanese Pilot’s World War II Story, written by Marc Tyler Nobleman, illustrated by Melissa Iwai, was bestowed the Young Reader’s Award. Ms. Iwai was also in attendance at the Awards Dinner. 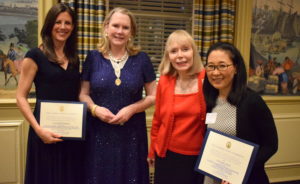 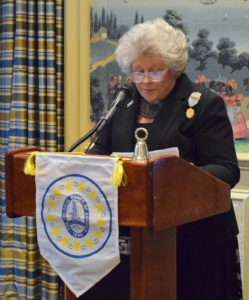 The Society’s forty chapters engage in historic preservation and education projects around the world. The CDA Award for Excellence, initiated by Past President General Helen Evans, is bestowed annually upon one or more chapters and awards up to $1000 in support of outstanding chapter projects.

During the dinner, Chapter President Connie Grund of Chapter XXXIX-Birmingham, Alabama, reported on their chapter’s project, for which they received the 2018 CDA Award for Excellence. Proceeds supported The American Village in Montevallo, Alabama, enabling the purchase of costumes and props for historical interpreters to represent the wife and children of Alexander Hamilton in a vignette now performed regularly for visitors of all ages. 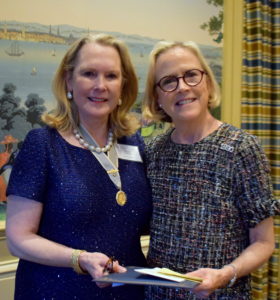 The 2019 Award for Excellence recipient was announced as Chapter XXXVIII – Santa Barbara, California. Their project supports the restoration of the Cota-Knox House (built 1871), an important and unique building in Santa Barbara. The $1000 cash prize will go toward the creation of colored architectural renderings to illustrate the completed project – with the aim of attracting local and regional donors. Kathi Chulick, a member of Chapter XXXVIII and past Chapter President, accepted the award on her chapter’s behalf. 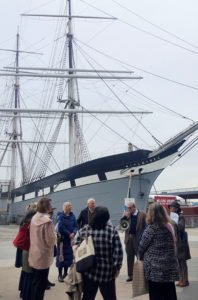 The tour started in front of the South St. Seaport Museum and continued south along the water to the Staten Island Ferry. The tour’s theme was the importance of shipping and the waterfront in New York City’s development. During stops throughout the tour, Mr. Kaplan shared facts and anecdotes about the original Fulton Ferry, the impact of the Erie Canal’s construction, and notable figures such as Cornelius Vanderbilt. 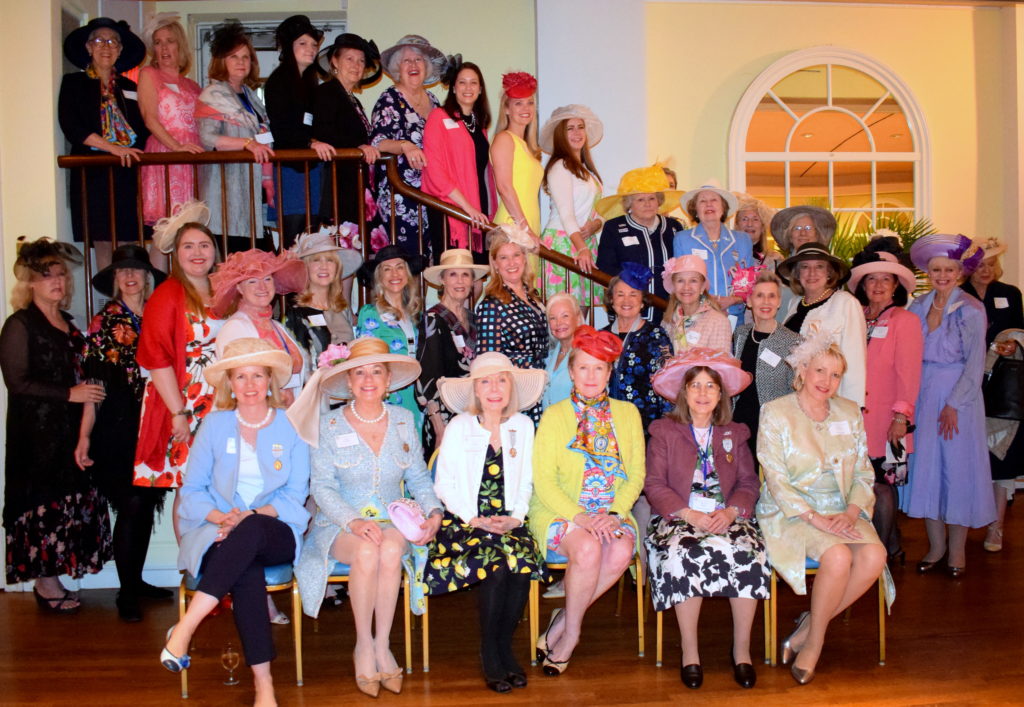 The Society’s ever-popular Garden Party was held late Sunday afternoon. Due to sporadic rain, the event took place in the Abigail Adams Smith Ballroom, which was abloom with live plants and colorful hats. Guests were encouraged to stroll through the garden of the Mount Vernon Hotel Museum (MVHMG) to enjoy the spring flowers, including stunning tulips, carefully cultivated by CDA’s Garden and Grounds Committee. The museum, accredited by the American Alliance of Museums, is wholly owned and operated by The Colonial Dames of America. 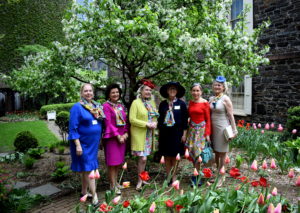 While enjoying hors d’oeuvres, cocktails, and conversation, party guests also supported the Society by contributing to the museum’s educational projects and to the Book Award Committee. The Development Committee oversaw a silent auction of various items, the proceeds of which support interns at MVHM. The Book Award Committee offered books in exchange for donations to support their activities throughout the year. 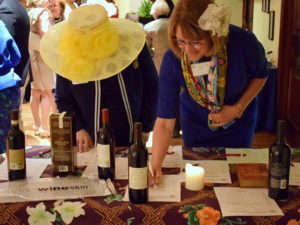 The Annual Meeting & Luncheon was held at a private club in New York City on Monday, April 29th.

The day began with a morning series of workshops. President General Brantley Knowles spoke about several of her initiatives. Pegi Ivancevich, a member of the ad hoc  Insignia Committee, shared the committee’s results updating CDA’s insignia based on historical analysis. Both the new ribbon and a sample of the newly-struck insignia were available for viewing and ordering.

Jocelyn Lance, Chairman of the CDA Gates at Jamestown Campaign, presented the status of the fundraising campaign to restore the 1907 CDA Gates at the entrance of Historic Jamestown in Virginia. 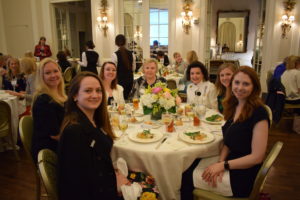 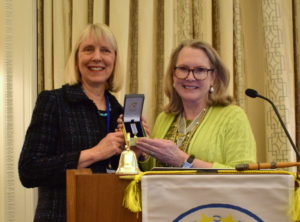 The business of the Society was conducted during the luncheon, with reports given by Committee Chairmen. During her President General message, Brantley Knowles presented 1st Vice President Beverley Sherrid with the first newly-minted CDA miniature insignia to recognize Beverley’s two decades of service as Registrar General.

Members were encouraged to make plans to attend the 2019 Fall Benefit, which will be held in New York on October 16th.

The newly installed slate of officers of the Board of Managers includes:

This year, a record nine Dames were presented Van Rensselaer Awards for their service to their chapters: 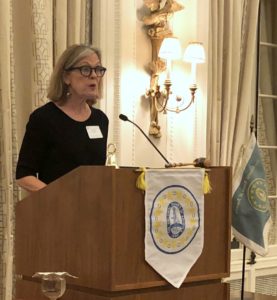 Elizabeth Kostelny, CEO of Preservation Virginia, spoke about the historical ties between CDA and her organization, which oversees Historic Jamestowne, the site of the 1607 English settlement. She also shared the history of the 1907 CDA Entrance Gates to Jamestown Island and the status of their restoration, made possible by the Society’s targeted fundraising campaign. Earlier in the luncheon, it was announced that CDA would be planning a special trip to Virginia, in September, for the rededication of the gates, along with other events and activities. Ms. Kostelny expressed her gratitude for CDA’s continuing commitment to historic preservation and looks forward to welcoming members and their guests who are able to participate on September 18th for the rededication ceremony.