It was a summer of history, when Dames represented our Society across the world. President General Sharon Vaino and Second Vice President General Brantley Knowles were involved in the events in the UK surrounding the 800th anniversary of the signing of the Magna Carta. Pictured at right: Beverley Sherrid

The celebrations that Sharon attended began the previous week and culminated in a rededication of the American Bar Association Memorial to Magna Carta at Runnymede on June 15. The event was attended by Queen Elizabeth II, Prince Philip, Prince William, and other notables, including U.S. Attorney General Loretta Lynch.

Sharon is pictured with her husband Jaan (right) and the United States Ambassador to the United Kingdom, Matthew W. Barzun, at the ambassadorial residence, Winfield House, in London during a Garden Party for the American Bar Association held June 14.

Brantley, who is president of the American Friends of the Lincoln Cathedral, is pictured with her husband, Peter, in Lincoln prior to the ceremony, which HRH Princess Anne, the Princess Royal, attended.

Many Dames enjoyed visiting the ship L’Hermione, which sailed to the U.S. from France. The frigate is a replica of the ship that brought Lafayette across the Atlantic when he came to support the American Revolution. Chapter IV-Paris was among the benefactors of the rebuilding of the L’Hermione and the chapter held a breakfast on board in Bordeaux in October 2014. Kathy Springhorn (BOM), Beverley Sherrid (1st VPG), Charlotte Squarcy (Chair, Garden Committee) and other members participated in summer events as the ship moved up the Atlantic coast of the US. Beverley represented the Dames in the Lower Manhattan Historical Society July 4 Parade and is pictured carrying the CDA flag. 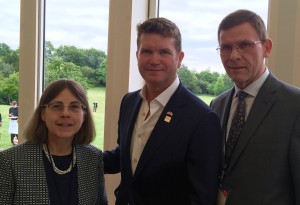 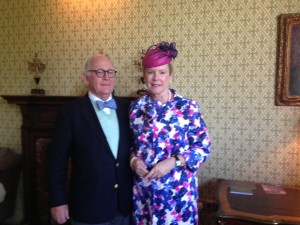